On Friday, July 13th, BABY SF is making an appearance at Big Umbrella Studios! We will have a booth there with specially discounted items for the event, including original print headbows for just $12 +tax ♥

Best of all, admission to the event is free!
We hope to see many Lolitas in attendance~
Join us here or here. 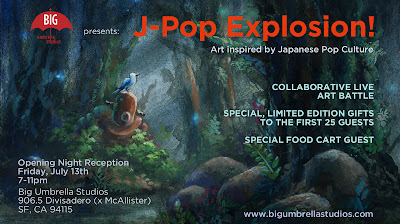 Our next show is at hand. This time around we’re doing a little homage to Japanese Pop culture. Japan is a really funny place. It’s an epic travel destination too. It will bleed your bank account dry within a few days, but there is no such thing as a “rough neighborhood” so you’re free to walk the streets completely trashed from a never ending night of sake bombing.

To me Japan is at it’s high point of pop culture hilarity when they manage to copy American pop-isms and then due to vast cultural and linguistic differences (read: Japanese speak English better than you speak Japanese and their English is terrible!) they  are forced to re-interrupt  and spit it back out to us. The results will often vary, but will always be awesome.

From Harajuku and it’s kawaii girls and boys to Puri-Club and Tonkatsu Ramen whose milky stock has been simmering away for years, to Manga and of course Miyazaki, Hello Kitty, Akira, Macross, Voltron and just plain Anime in general it’s safe to say we have an affinity for the land of the rising sun.

Come celebrate this crazy, weird Island of awesomeness and it’s far reaching influence with us as we open J-Pop Explosion!

Featuring a live art battle, Japanese or possibly Vietnamese food, but hopefully Japanese, limited edition special gifts to the first 25 guests, and much more, this is an event not to be missed!